Be safe, we are all in this together!

Freezer meat with my 54!

Anything that has Nothing to do with archery!
Forum rules
No political rants, discussion or arguing.
Post Reply
3 posts • Page 1 of 1
Message
Author

Freezer meat with my 54!

This past weekend I went back to the Haverstick Game Preserve and Home for Wayward Hillbillies to try one more time to add some meat to my larder. It was the second weekend of Missouri's firearms season and I had yet to burn any powder. It was not for the lack of opportunities, I was just being picky. Just before that season started, I had killed a nice little buck with my recurve so I was not in a meat crisis. What I was really wanting was a fat, mature doe. We have an overabundance of slick heads on the farm and I took it as a personal mission to reduce their numbers. You would think that wouldn't be such a hard thing to do? Think again. Since the firearms season started, I have been plagued with little bucks swarming about me. The does all stay well out of my limited range while the spikes, forkies, little sixes and eights all climb in my lap. I know, that's a good problem to have, but I wasn't going to burn my remaining buck tag on one of them. I still have lots of season left. Besides, I really, really wanted a doe.

The moon has been coming up right after dark and not setting until daylight so morning hunts have pretty much been a waste of time. One my Saturday morning hunt, I saw a garden-variety 8-pointer with his nose to the ground and that was it. I was hunting from the ground that morning in a new spot that I just knew would pay off. There is a strip of brush that runs from the west side of our lower hay field out about 2/3 the width of the field. The west side is bordered by a creek bed and the deer just love to come out of the woods, cross that creek bed, and jump the fence by that strip. They then walk down that strip to get to the other side of the field which would give me a perfect 25-yard broadside shot. I was decked out in a ghillie suit and had made myself a nice little spider hole to hide in. The wind was in my face and everything was perfect. Well, except for the lack of deer to shoot at. I went back to Dad's house, drank coffee, ate some of his homemade cookies, and planned my afternoon assault.

I went back out around 1:30 to beat the afternoon deer rush. Since they hadn't stirred all morning, I figured the afternoon would be busy. I climbed up in a ladder stand Dad had just put up this season that is located just past the east end of the brush strip I mentioned earlier. There is a salt lick close and we have been seeing deer camped underneath this stand all year. The wind was good to sit there and I felt pretty confident about my chances.

Around 2:30, things started moving. I saw a doe come running behind me, south to north, and stop just few yards from where I had been that morning. I figured a buck was chasing her, but never saw one, as she started grazing. She was about 150 yards away but it was possible that she would work her way over to me. Time was on my side so I waited.

Soon, two more deer showed up and after I looked them over with binoculars my suspicions were confirmed - little bucks. They split their time between feeding, harassing the doe, and sparring. Below is a little video of one of the sparring matches. It is rather humorous considering the size of the combatants. At one time, both of these dinks were less than 20 yards from me. Curses! My kingdom for a doe!
Finally, the bucks did something worthwhile and chased the doe my direction. She was coming from behind me on my left side - not great considering I am left handed. She looked like a 2-year old and, while I would have rather had a chance at her mother, she would do just fine. All she needed to do was give me a shot. The distance was not a problem, about 30 yards, but I couldn't position for a shot because she would hear the movement. There wind had died down to nothing, and the leaves were gone, so I had to wait until she walked out past me, facing away, before I could pull the trigger.

She got right even with me and suddenly balked. She put her nose in the air and must have smelled me because she got spooky all the sudden. She turned back around and walked away about 10 yards. She started feeding again which the little bucks must have thought was an invitation. They started working her way so she turned back around coming my direction. I guess I was the lesser of two evils!

She finally committed to going across the field so I let her walk past me until she was definitely facing away. I had the hammer already cocked so when she stopped at about 30 yards, at my 10 o'clock position, I sighted in and pulled the trigger. Smoke was made, a boom was heard, and the Lord called that little doe home. I am always a mixture of emotions at that time. As I get older, I find it harder and harder to take the life of another animal. I am happy that I accomplished what I set out to do with the primitive equipment I used but I also feel sadness about the result. To that end, I always thank the animal's spirit for its sacrifice and vow to use their body to the best of my ability. 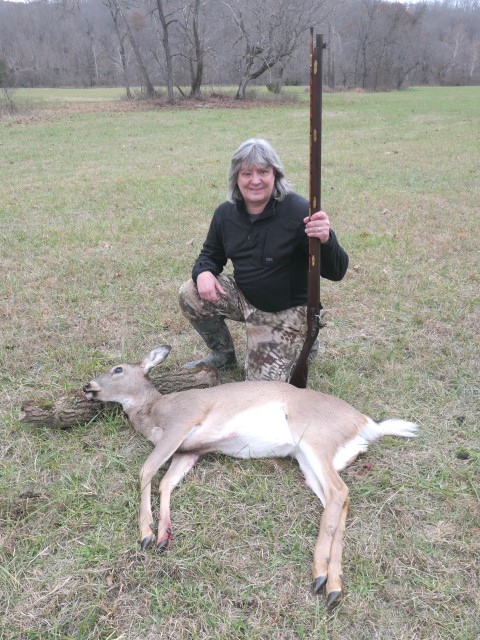 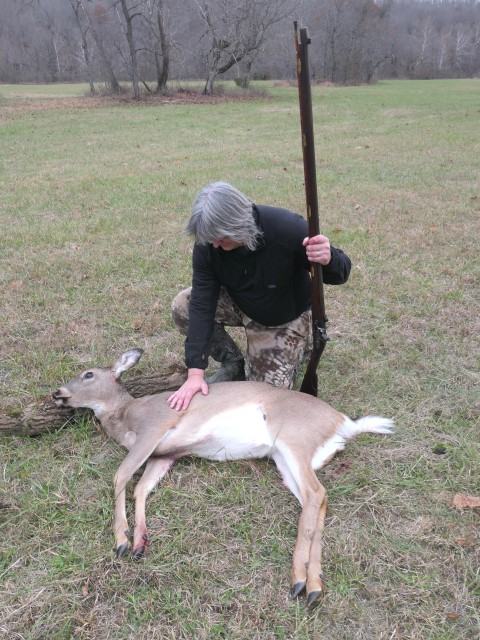 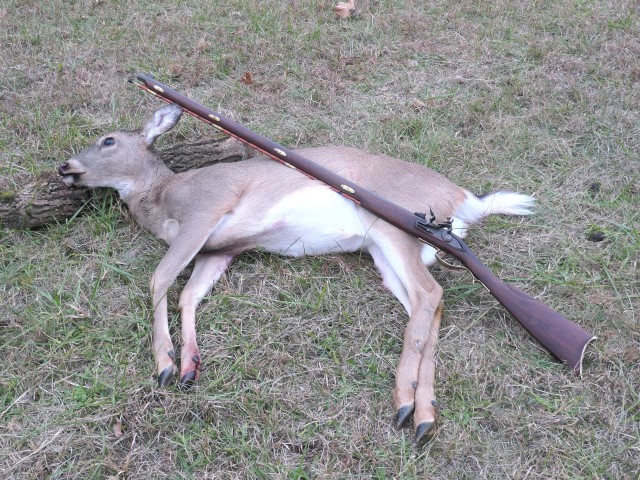 So now it's all work. The doe is now sitting in a cooler waiting to be cut up this evening. I already have plans for smoked venison roast and fried backstrap in the very near future. I know I am very fortunate to have land to hunt on, and plenty of game to hunt, and that is just one of the many things I will be thankful for as we celebrate those things this coming Thursday.

Equipment notes: The rifle I used is a 54 caliber homemade affair made by my dear friend, John Pruitt. It has a 42" swamped Colerain barrel and the walnut used for the stock came from my farm. I used 85 grains of FFF under a .53" patched round ball.

Fantastic, Darren! As you know, my favorite way to make back straps is with a sharp pointy twang-stick, followed closely by a smoke factory! And you've managed to cross both of your list this season. Congrats!

Congrats on following the plan and harvesting what should be some good venison.
Calling Elk - Awesome! !€
Top
Post Reply
3 posts • Page 1 of 1