Flintlock success in the turkey woods

Anything that has Nothing to do with archery!
Forum rules
No political rants, discussion or arguing.
Post Reply
4 posts • Page 1 of 1
Message
Author

Flintlock success in the turkey woods 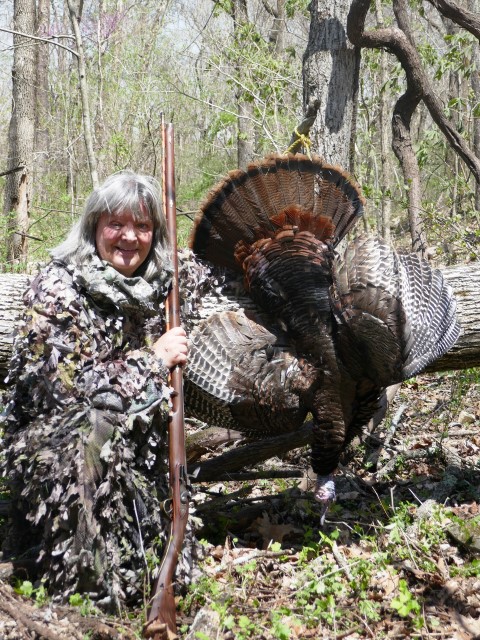 I took this past Friday off to start my turkey hunting weekend a little early. The weather forecast for that day and the next was dry, after that – not so much. That worked okay for me because, like all turkey hunters, I expected to be tagged out by early on the first day of the hunt. So, I packed my truck Thursday afternoon with my half ton of essential hunting paraphernalia and headed to the family farm in south-central Missouri where my dad still lives. He welcomed me with a cauldron of hot soup, a warm hug, and a cannister full of homemade peanut butter cookies. It was good to be back home!

I started Friday morning before daylight across the creek and on the east side of our middle hay field by the graveyard. I figured I’d listen there for a while and see who gobbled where. After 30 minutes, it became abundantly clear that no one was going to gobble anywhere so I just picked a direction and started walking. I tried for an hour to drum up some action and finally heard a bird gobble on the ridge south and east of the graveyard. There is an old logging road that goes up there, so I hoofed it that direction and started the ascent. I wasn’t exactly sure of the tom’s location until he gobbled two more times a mere hundred yards away. I froze for a moment, trying to figure out what to do. The woods still looked like wintertime so there was very little cover between him and me besides terrain. He was on a point and I was on the other side of the holler from him. Fortunately, the problem was solved quickly when I took two steps and scared up a doe who ran right over the top of him. It was just as well. I didn’t feel like packing his carcass out anyway! I spent the rest of the morning wandering around looking for turkeys and mushrooms. I found two of each, hens and morels, plus a dried up armadillo. 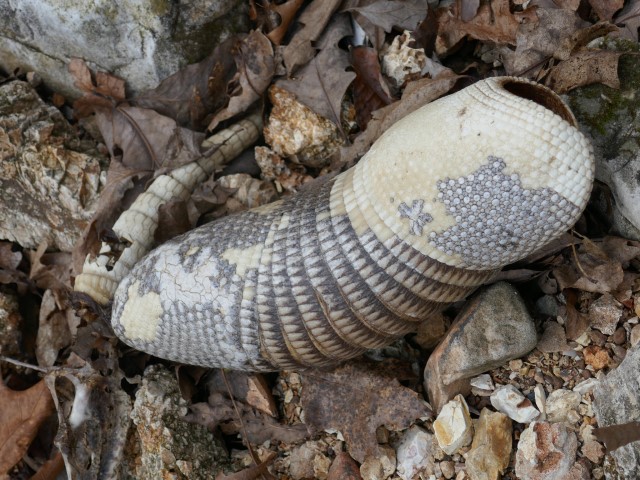 Saturday morning started out the same way Friday did, completely silent. This time I decided to explore the southern end of the farm. Down that direction, across the creek, is the Granny Field, a haven for deer and turkey. It’s an overgrown field with a spring in the middle of it where Great Great Great Granny Clark had a house once upon a time. I can’t count the number of times I have snuck down the road leading into that field, peeked in, and seen turkeys. But not this time. So I took the logging road that goes up the ridge on the field’s west side to see if I could shake something loose. I did the loop that took me up to the Deer Turnaround, down into Woodland Holler, and back along Deer Highway that borders the creek. I ended back where I started with nothing accomplished but getting my steps in. It was 8:30 so I decided to go back to the house, drink coffee, and cuss turkeys with Dad.

(I found this guy in his dust bowl) 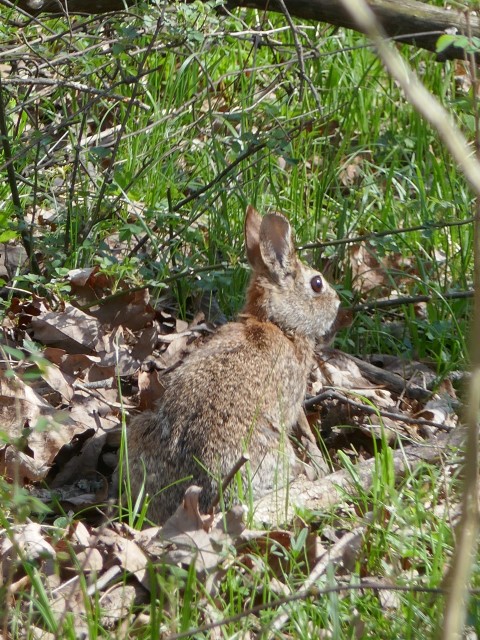 After a peanut butter cookie pick-me-up, I wandered around a little more, did some calling, and generally wasted time. At 10:00 I decided I would go to the far end of the Granny Field and make my last stand for the day. The field comes to a point at its southern end and there is a park on the west side where deer and turkeys often hang out. It has a few widely dispersed trees with shade and high green grass. The steep ridge on the west side comes right down to it and there is a huge thicket that is only a quick run away. I have killed turkeys there before and I figured I would set up and call until I either killed a bird or ran out of time. Missouri’s season ends at 1 pm every day.

After wading across the creek again and sneaking up to the field edge, I peered in and saw movement in the very spot I was planning on going. The distance was about 300 yards, but it looked like two hens milling about. These two brown dots were suddenly joined by a puffed-up black dot and I knew the game was on! Now I just had to figure out how to set up on them.

The creek runs along the east side of the field and there is a thin strip of woods between them. It is filled with thorns, vines, and all sorts of nasty impenetrable vegetation. I decided that traversing through that would be my best bet so I set off hacking my way through, using nothing but the long barrel of my flintlock and fierce determination. My plan was to get closer, sneak to the field edge, set out a couple of dekes, and lure the tom to his death. I lost sight of the birds as soon as I started my assault so I was working on faith that they would still be there when I got to where I wanted to be. Unfortunately, I could find no suitable place to set up. Any tree I could get against had too much brush in front of it to shoot through. So I kept moving closer to the birds’ last known location, hoping I could find something that would work.

Finally, when I was about directly across from where I thought the turkeys were, I found a big muscadine grape vine I could lean against that was about five yards from the field edge. It wasn’t great but it would work. I snuck out to the field and put out a jake and hen decoy. I got back to my spot, set up my Ghostblind, and got my calls ready. A quick glance at my decoys made me realize that they were only about 20 feet from me; not an ideal setup but I should be shooting before a longbeard got that close anyway.

(An example of a Ghostblind setup) 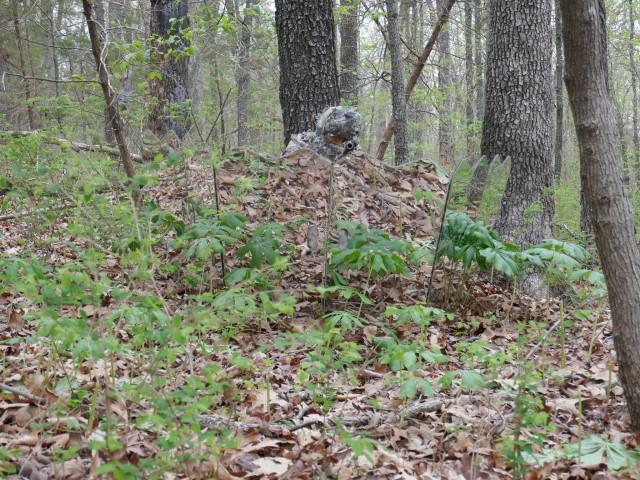 I yelped on a pot call and followed up with some yelps on a diaphragm. I was immediately answered by a hen, which was a good sign. She was in the big thicket at the end of the field. We talked back and forth for a while and I finally saw her walking around about 75 yards away. The terrain at that end of the field is very uneven so I lost sight of her soon. I kept hoping for a gobble but all I got was hen talk.

After 20 minutes of this I finally see some jakes walking around with her. They all had visible beards which makes them legal where I’m at. One of them goes into strut and gobbles. Okay, so it ain’t a longbeard, but I ain’t particular. I lose sight of them in the field gullies, but we are still talking.

Another 10 minutes goes by and I can tell that they are finally on my side of the field. I figure they must not be able to see my decoys, otherwise they would be in my lap. As if on cue, I see a blue head pop up about 50 yards away and I see him lock in on my Funky Chicken decoy. Now the fun begins! His six or seven buddies see what he sees and they all come charging my direction to give somebody a whuppin. I’m about to witness a beatdown and I’m afraid I won’t be able to get a good bead on one during the melee. Lucky for me, the lead jake goes into strut, slowing him and his posse down. I sight in on his neck and as soon as he comes out of strut, I pull the trigger on Sweet Rachael. Of course, it’s hard to see through the cloud of smoke so I jump up to witness a bunch of birds in retreat except one and he’s lying 26 steps away with nary a twitch or a wiggle. My flinter has a Colerain turkey barrel and, man, I love that thing! 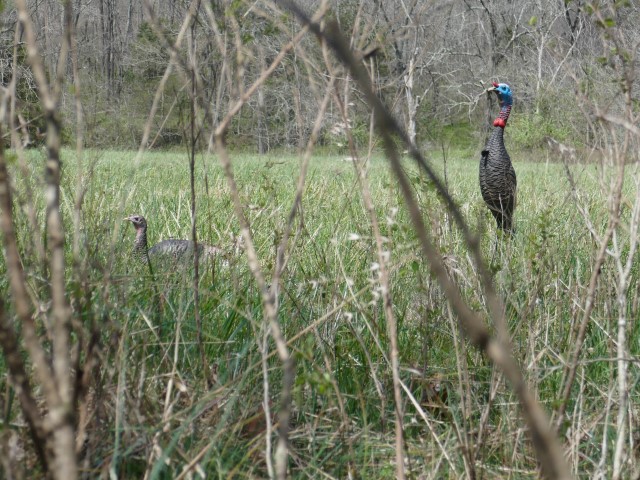 Well, the rest of the story is just about work, except for the pile of mushrooms I found that afternoon. The jake weighed 15 pounds and had a 6” beard. My turkey load for that 20-gauge fowler is 75 grains of 3F powder, 1 overpowder card, ¼” lubed fiber wad, 1 ½ oz. #6 shot, and 1 overshot card. 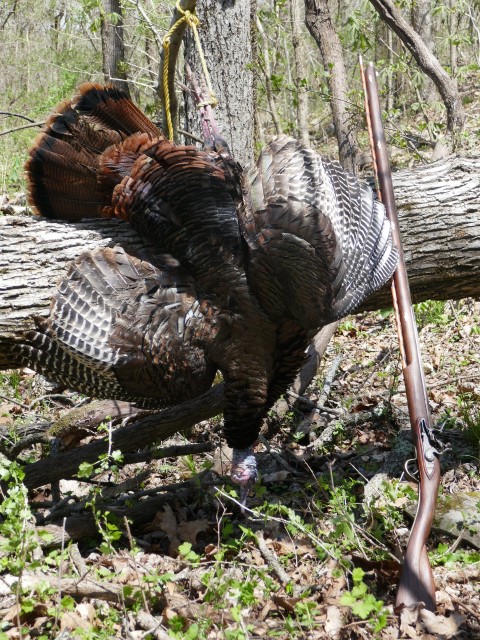 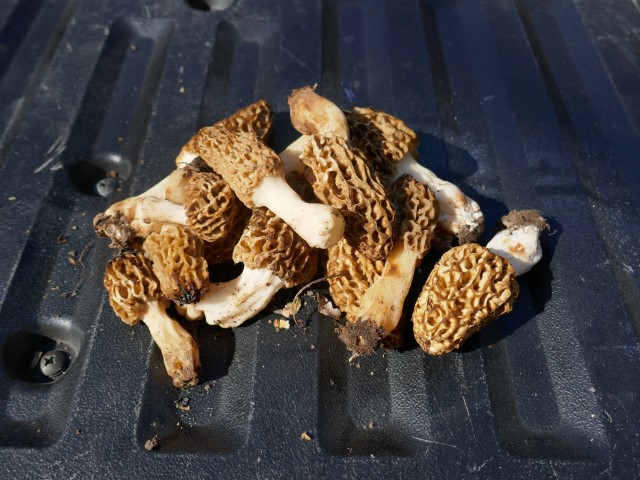 I’m going back to the farm next weekend to try to fill my second tag.